In our Sage Woman Q+A series, wise women share their knowledge with Tenth Moon Mothercare in the spirit of empowerment and sisterhood. We connected with Samantha Montpetit-Huynh to get the deets on an issue that’s SO IMPORTANT for all women, and especially those who have given birth: pelvic floor fitness. Do you pee a little when you sneeze? Steer clear of the trampoline? Many mamas do, and it’s not “just the way it goes” after having a baby.

If you experience pain or discomfort in Lady Land, it’s not the norm. Samantha brings an abundance of knowledge: Her many health and wellness certifications include pre/postnatal fitness specialist as well as pelvic floor pilates trainer. She’s the co-founder of Bellies Inc., a system that combines restorative exercises and abdominal wrapping to help women build core confidence for motherhood. Samantha has appeared on Breakfast Television, CTV News and the Marilyn Denis Show. We’re so happy to share her insight with you! Become informed and be your own best advocate…

What is the pelvic floor?

The pelvic floor is a group of slow and fast twitch muscle fibres, connective tissue and nerves that run from the front of the pubic bone to the tail bone and support the pelvis, pelvic organs and spine. They are an anticipatory group of muscles that anticipate your move and contract nano-seconds before movement to support you. They are the foundation of your core.​

Why is having a healthy pelvic floor important?

It’s important to have a healthy pelvic floor because it is the foundation of your core. Your core consists of 4 muscle groups; the diaphragm (the primary breathing muscle, the transversus abdominis (deep abdominal muscles), multifidus (deep spinal muscles) and pelvic floor. We call this the core 4 and during optimal core function, these muscles work synergistically to support you through movement.​

If you suffer from pelvic floor dysfunction (incontinence, prolapse, hip pain, pelvic pain etc), the foundation of your core isn’t working optimally thus throwing off your entire system. If the foundation of a house was not solid, you would not build; the same rings true for core stability and function.

Pelvic floor health is important for all women, but how do pregnancy and birth specifically affect the pelvic floor?

Remember the pelvic floor are like every other muscle in your body so if you don’t use it, you lose it! The hormonal changes that occur during pregnancy affect every muscle, tissue, ligament and tendon in the body and that includes the pelvic floor! The pelvic floor goes from supporting approximately 3lbs up to 20 to 30lbs or more depending on the number of babies in utero, so pregnancy alone has a huge impact on the muscles supporting it.

Add a vaginal birth and now you have an enormous amount of nerve compression and if there is tearing or inventions such forceps, vacuums or episiotomies, you can have long term damage to these tissues, impacting function if the necessary rehab protocols are not followed.

What are some signs that might indicate something is amiss?

Incontinence – leaking urine – is the first sign that the pelvic floor muscles are not doing their job properly however, that’s just the first sign and often gets pushed aside. Statistics show us that 1 in 3 women who give birth vaginally, leak urine when they cough, laugh, jump or run BUT just because it’s common, does not mean it is normal. We have normalized incontinence so women often ignore it until symptoms become worse.

Other signs that something may be wrong is feeling heaviness in your pelvis; pressure and the feeling that something just doesn’t “feel right”. And because the pelvic floor does more than just control continence, you can also have hip or back pain that is a direct link to pelvic floor dysfunction.

“1 in 3 women who give birth
vaginally leak urine when they cough, laugh, jump or run, but just because it’s common doesn’t
mean it’s normal.”

Pelvic floor dysfunction, in most cases, can be treated but like any “injury”, the quicker you get to it, the better. The most common problems are Stress Urinary Incontinence – SUI (leaking when you laugh, cough, jump or run), Pelvic Organ Prolapse – POP (Your pelvic organs i.e. uterus, bladder, rectum, are hanging lower than they should), Pelvic pain and pain during intercourse.

The problem is women aren’t being assessed after birth and are not told what signs and symptoms to watch out for. Seeing a pelvic floor physiotherapist is the best course of treatment because many of the most common issues that mothers suffer from can be minimized and every reversed! Surgery is commonly prescribed for many of these conditions unnecessarily and the recurrence rate is quite high because it’s a band-aid solution and doesn’t fix the true cause of the problem.

What are the options for someone who doesn’t have a benefits plan and can’t afford to pay for pelvic physiotherapy?

If you can’t afford to see a pelvic floor physiotherapist for treatment, I still highly suggest at least going for an assessment to see what you are working with. The last thing anyone wants is for something to happen had they known there was something they could have done to avoid it. Prevention is key so finding someone who knows how to work with women during pregnancy and postpartum and has the correct training is essential.

At Bellies Inc., we found a huge void when it came to safely recovering from birth so we created the Core Confidence program that anyone can do (pregnancy, postpartum or even years after birth) that was designed to retrain your core and pelvic floor safely and effectively. The program does not omit an internal assessment by a trained professional but at least it gives you a stepping stone to where you need to be.

The Bellies Inc. rebuttal to the Brooke Burke/Poise campaign suggesting women should learn to live with “light bladder leakage” was so good. Can you reiterate on how that sort of messaging does a disservice to women?

The unfortunate campaign with Brook Burke and Poise is again, normalizing incontinence and not getting to the root of the problem. I LOVE that people are talking about it and normalizing the conversation so people don’t have to feel embarrassed, but putting a pad on will NOT stop you from leaking and only further perpetuates ignorance about rehabilitation. Not one woman can deny that stopping leaking all together is much more empowering than wearing a pad to hide symptoms. There certainly is a time and place to wear pads i.e. during treatment and doing your own rehab, but the goal is to STOP wearing the pads all together because you have got confidence back again! Now THAT’S empowering!​

“Just for the record – LBL (light bladder leakage) IS NOT PART OF BEING A WOMAN!!! I am seizing my Poise moment right now by telling anyone who will listen to ignore these commercials. see a pelvic floor physiotherapist and then tell every other woman you know to do the same! Poise moment my ass! This angers me beyond belief. “LBL is part of being a woman” ?!?!?! WTF! No it’s not!!! “having little leaks doesn’t have to slow you down” I disagree – it is your body asking for help so slow down and listen and do something about it! ‘what a drag…so you’re avoiding certain things because of this problem….and this is the solution’ cue poise pad close up. THIS IS SO WRONG! This is not empowering women!!! ‘Water, Towel, Poise’ in the gym bag??? NO!!! Go to a f*cking pelvic floor physiotherapist (pardon my french) and treat the problem. Don’t mask it with a chemically laden pad. Brooke you are in a position to truly empower women through fitness and movement. I am truly disappointed about the message that continues to be used in women’s health products. Let’s empower women about the options to FIX the problem. Yes, pads can play a role in recovery but the message that young, fit women need to carry a poise pad in their gym bag and to not worry about it has to stop.” 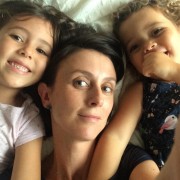 Lindsay is the founder of Tenth Moon Mother Care, a mom of two and a postpartum wellness activist. When she's not busy bundling up Tenth Moon care packages for new mamas, you might spot her on TV talking about the fourth trimester, blogging about maternal health or perfecting her "padsicle" recipe.

10 Ways to Practice Self-Care When You Have a Newborn

Created to help soothe the hearts of women who experience miscarriage and later pregnancy or infant loss.

Only $38 plus shipping. A portion of the proceeds support the Pregnancy and Infant Loss (PAIL) Network.